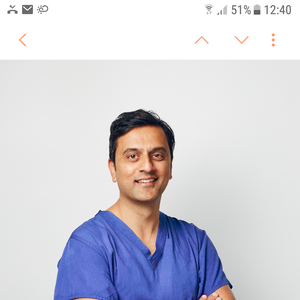 His clinical practice primarily consists of laparoscopic colorectal surgery, advanced colonoscopy and interventional endoscopy, and laparoscopic hernia surgery. He also has an interest in minimally invasive treatment of haemorrhoids and fistula in ano.

Mr Haji graduated from the University of Cambridge in 1999 where he was awarded a Bachelor of Medicine and Surgery degree and a Master of Arts. His initial internship was in Cambridge and East Anglia and he subsequently moved to London to complete his basic surgical training at Basildon and University College London Hospitals. His higher surgical training was in the South East Thames area which included a research period of 3 years at King's College Hospital.

Mr Haji was admitted as a Fellow of the Royal College of Surgeons of England in February 2010 and received his certificate of completion of training (CCT) in March 2011.

His research and clinical interests are in utilization of high frequency colonoscopy ultrasound in the staging of colorectal polyps and early cancer. He completed a fellowship in advanced colonoscopy with Professor Kudo at Showa University in Japan in 2010 and since then has developed a practice of endoscopic mucosal resection and endoscopic submucosal dissection in the treatment of colorectal polyps. He is on the endoscopy committee at the British Society of Gastroenterology and also on the ESD guidelines committee at the European Society of Gastrointestinal Endoscopy (ESGE). His advanced endoscopy interests include POEM for achalasia, G- POEM for gastroparesis and metabolic endoscopy